Posthumous: that which is dead, decayed, consumed. Not a dictionary definition.

Posthumous review: reviewing an event that happened too long ago to be of use to anyone whilst shamelessly advertising events the second, prodigy of aforementioned deceased.

On January 25th (2015) I travelled for The Bacchae pt.1 a paganistic winter sacrifice in Jesus College, Cambridge. Our offering commenced (if such a word is appropriate) with a reading of Simon Jarvis’  ‘Dionysius Crucified’ in the chapel. Christianising the Greek god, the reading was accompanied by the swinging of incense and chanting: theology is the queen of the sciences. This in itself was highly curious to me: the air smelt like burning, the experience was unnervingly lulling. The poem ran through and exhausted itself.

There was a noise. Goat-faced, Jeremy Hardingham pulled movement to the evening. Binding the poet Vahni Capildeo in virgin-white material, the sacrifice began with a screech. Accompanied by the beast constructed in an afternoon and known only as Mega-Snake we maenads snaked from the chapel and into the blackness of the college cloisters. Janani Ambikapathy chanted excerpts from Euripides Bacchae hidden by words. Glowing against the January night we followed the ritual led by dancing screams. We reached the altar: a single tree. Vahni-as-sacrifice was chained down as Dionysus prepared his axe. The sacrifice was trimmed and prepared, losing great swathes of material, crying ancient and redundant Greek. The axe came down. It shattered into a laptop, shattering against the silence of the audience. Unmasked, Dionysus asked the emptiness: ‘Why then delay (to do) what is inevitable?’

We peeled away leaving nothing behind us. 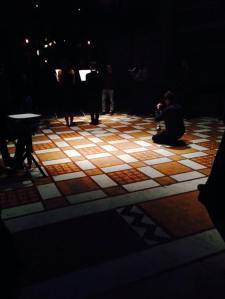 I returned to Cambridge a second time, this time for Vahni Capildeo’s event The Maenads of Necessity, on the 13th of March (2015). This time we convened to usher (gently, gently) in the Springtime.

We spent a day dressing the English Faculty Drama Studio in ivy, pillars and snakes. Mega-Snake returned, scathed, from the Winter Bacchae to lounge lazily above the door and hinder all who tried to enter. Dino Mahoney bought us carrots. We hung them from the ceiling with masks.  We prepared the colours of Holi in the sink –

Mega-Snake lounges above the doorway

Brutal Dissection of a Memory

Alice Meyer: Shredding of ‘Deer on the High Hills’, recreation of a text with audience 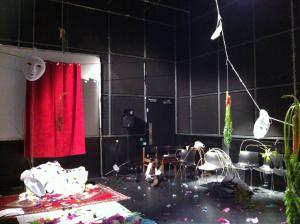 The evening began with Welsh. It fell into an ancient mayhem, crammed with words and whisperings and decapitations (of texts and of voices). Beneath our feet we trampled our ground to death. Jalina Mhyana wrote on leaves in black biro. Disco urchins were thrown against the wall. Blodeuedd pressed pomegranates into the hand of Persephone. Hades whipped the air black. I sat and I watched. I sat and I observed. Everything was rich and strange – Jo Cobb’s film tempted in the spring. Together we watched in silence. After that we continued in a hush (shush now, shush), reading in a maenadic relaxation.  Everything was words. Blodeuedd took to the oak whilst Gwydion and Math danced a strange dance beneath a white sheet. They cast a spell into flowers and into colour. Our spring began with music and Holi.

Also: a piece on memory linked to this.

I apologise profusely if I have neglected, by accident entirely, anyone who took part in these events.